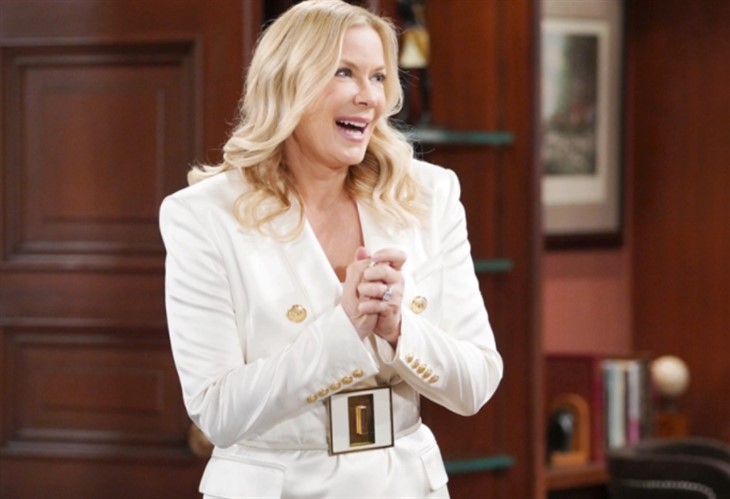 The Bold and the Beautiful spoilers for the week of May 10 reveal that Zoe Buckingham (Kiara Barnes) gets some bad advice. Brooke Logan Forrester (Katherine Kelly Lang) finds out about Quinn Forrester’s (Rena Sofer) affair. So, she tells Zoe that she should pop in and surprise Carter Walton (Lawrence Saint-Victor). However, she finds Carter in bed with someone else.

The Bold And The Beautiful Spoilers – Zoe Buckingham Frustrated

B&B spoilers reveal that Zoe is still trying to get back with Carter. Despite it being several weeks since her betrayal was discovered, she hasn’t given up on him. Carter has told her that it’s over but she refuses to give up and is now using Quinn to try and get back her relationship. However, she’s not getting much information from her new friend.

Brooke will be venting about Quinn after finding out about Eric Forrester’s (John McCook) marriage problems. At some point, Carter will become part of the conversation. When Carter gets too passionate about defending Quinn, it will raise Brooke’s eyebrows. She will flat out ask him why he is such a Quinn fan these days. She will end up connecting the dots. Although she doesn’t want anything bad to happen to Carter, she does want to take Quinn down.

The Bold And The Beautiful Spoilers – Brooke Logan Forrester’s Scheme

The Bold and the Beautiful spoilers reveal that Brooke will come up with a scheme to target Quinn. She ends up giving Zoe some advice. Now, the fact that Brooke is seemingly helping Zoe should be a big red flag. However, Zoe will try anything and is desperate. So, she takes Brooke’s advice and decides to sneak into Carter’s apartment. She’s going to surprise him but it is Zoe that ends up getting the shock of her life.

It is teased that during the week of May 10, Zoe ends up surprising Carter and discovers him with someone else. Most likely, Quinn hides underneath the sheets while Carter is left staring at an open-mouthed Zoe. It is confirmed that Zoe discovers that Carter has moved on with someone else. However, she doesn’t know who it is at the beginning of the week. Eventually, Carter and Quinn’s secret will get out. When Zoe finds out about Quinn’s betrayal and secret, how will she react? Will Ridge Forrester (Thorsten Kaye) and Eric also find out the truth?

What do you think of Quinn and Carter’s affair? Will Zoe end up finding out who Carter has moved on with and how will she react? Could Carter’s job and friendships be in jeopardy when the truth comes out? We will have to keep watching the CBS soap to find out what happens next.

Be sure to catch up on everything happening with B&B right now. Come back often for The Bold and the Beautiful spoilers, news, and updates.