THE prevailing slowdown in the property market has forced some property developers to cut their sales targets. In contrast, Matrix Concepts Holdings Bhd has no reservations about meeting — or even surpassing — its target of RM1.1 billion for the financial year ending March 2021 (FY2021).

The group continues to attract homebuyers by offering the right product based on an area’s affordability and demographics. Its properties, most of which are landed, are normally priced between RM300,000 and RM500,000.

“We are confident that we can surpass or at least meet the target,” Matrix Concepts founder and deputy executive chairman Datuk Lee Tian Hock told a press conference following the release of its financial results for the fourth quarter ended March 31, 2020, at the group’s head office in Seremban recently. Matrix Concepts chalked up over RM1.04 billion worth of property sales in FY2020. 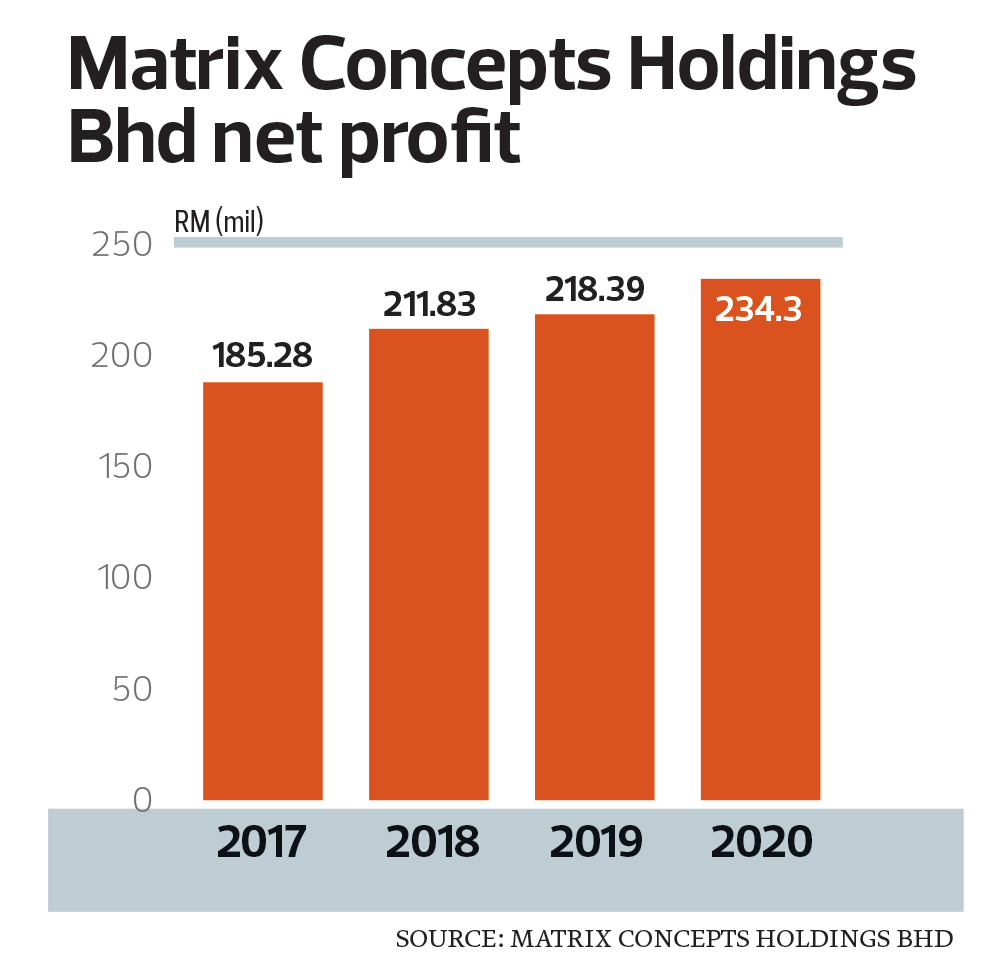 However, Lee thinks the recent cut in Bank Negara Malaysia’s key interest rate to 1.75% — the lowest since the floor was set in 2004 — will make it easier for people to get loans to purchase properties while encouraging those who put their money in fixed deposits to invest in properties.

Lee is cautiously optimistic that the group can convert 70% of the bookings into sales for FY2021.

Matrix Concepts’ net profit for FY2020 rose 7% year on year to RM234.3 million. This was achieved on the back of a record revenue of RM1.28 billion, up 23% y-o-y, on higher contribution from its residential and industrial properties in Negeri Sembilan.

The group has RM1.04 billion worth of property launches planned for FY2021, with RM1 billion in unbilled sales to be recognised over the next 15 months.

Its chairman Datuk Mohamad Haslah Mohamad Amin is bullish on the group’s earnings for FY2021, saying it will be able to “show some good numbers, if not better. We should be able to sustain ourselves”.

An analyst from a bank-backed brokerage, however, notes that at this juncture, it is difficult to say whether the group will post better results for FY2021 as the full impact of the MCO has yet to be factored in.

Still, comparing itself with its listed peers, Matrix Concept has recorded an impressive set of financial results so far.

“It has definitely outperformed its listed peers on Bursa Malaysia on a relative basis. Nevertheless, structural issues such as oversupply remain in the industry,” the analyst cautions.

While having more affordably priced properties will certainly help in terms of being able to sell more units, the analyst notes that Matrix Concepts also faces stiff competition in this space as other developers start to shift their offerings away from the higher-end segment.

That said, he points out that Matrix Concepts’ developments are mainly concentrated in Negeri Sembilan through its Sendayan developments, and there is less competition from other developers in the area.

“Earnings visibility will continue to be supported by new sales and unbilled sales of 0.8 times cover (RM1 billion). To compensate for the slowdown of construction progress during MCO, construction works are being ramped up to get it back on track (targeted to catch up within six months),” he writes in a July 13 note to clients.

Lim also expects the group to be able to pay at least 10.5 sen per share in dividends for FY2021, translating into a yield of 5.7%. He adds that its healthy balance sheet of 0.07 times net gearing as at FY2020 will provide the buffer to sustain itself through this difficult environment. Matrix Concepts declared a total dividend payout of 11.5 sen per share amounting to RM95.2 million for FY2020.

EquitiesTracker head of research Lim Tze Cheng says the outlook for the property sector remains challenging. However, prospects might be better for properties below the RM700,000 threshold.

“Much depends on the type of housing and the location in question,” he tells The Edge.

He says there is still demand for properties in Negeri Sembilan as the state does not suffer from a glut in residential properties like Johor and Kuala Lumpur. 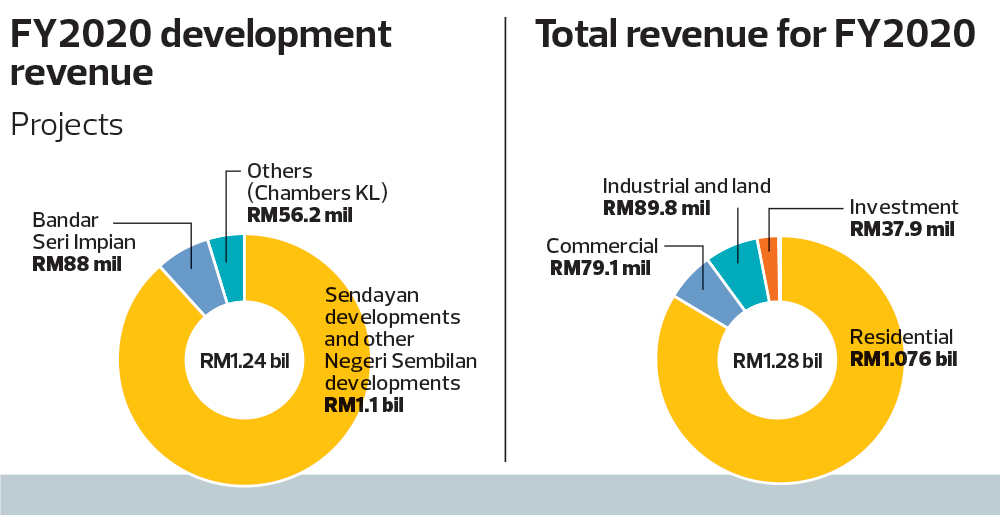 Savills Malaysia managing director Datuk Paul Khong says the residential market has taken a hit since 2014 and has been plodding along — with higher-end segments in the market performing relatively slowly and most developers going into the affordable segment to address the latent demand from the mass market despite lower profit margins involved.

“Amid the current economic climate, sales activity in both primary and secondary markets is expected to be slow in the next six to nine months. However, we are expecting in the medium term that genuine home purchasers will be back looking for good buys,” he adds.

Khong is of the view that the affordable segment will continue to contribute to residential market sales.

Medium-range properties priced at RM250,000 to RM500,000 have been growing from 24% in 2010 to 34% in 2019. The segment also accounts for 30% to 34% of the Greater KL residential transaction volume. For developments in Negeri Sembilan, Khong notes that projects there will be able to generate better margins given the low land prices, although there is a big trade-off between price and travelling time from KL.

He adds that affordable housing projects will keep developers’ engines running, as they look to the mass market for sales and to keep numbers high. “Profit margin on the affordable projects will obviously be compromised as it is in the budget category and developers must now be efficient in cost controls in their construction works (without compromising on quality) and deliver the sale numbers.”