The Elliott Wave Oscillator (EWO) is the difference between a 5-period and 35-period simple moving average (SMA) based on the close of each candlestick.

Formulaically, it can be expressed as:

Uses of the Elliott Wave Oscillator

Interpretation of the EWO can be done through what its individual components tell you.

Hence, we can interpret positive or negative EWO values in different ways:

The Elliott Wave Oscillator is fundamentally a trend-following indicator.

We can view it in one of two ways. We can either look at its value – positive or negative – or we can look at its rate of change.

If the EWO is both positive and increasing, this is a bullish sign on two fronts. The near-term trend is bullish and the uptrend is getting stronger.

If the EWO is both negative and increasing, this is doubly bearish. The near-term trend is bearish and the downtrend is becoming stronger.

If we require those two conditions to be met when taking a trade at the very least, it is likely to increase its accuracy. A straightforward interpretation might be to go long when the indicator is positive and go short when the indicator is negative. However, trading based on signals that inherently lag price is not the best idea.

Multiple factors should line up to help confirm trade signals. This could include the use of price, support and resistance levels, different technical indicators, and fundamental analysis of the market being traded. Essentially whatever it takes to get the trading decision correct.

The EWO on its own will produce a ton of signals due to the natural frequency of 5-SMA and 35-SMA crossovers. But on its own that’s not a valid trading system, so strict filtering is necessary. Pairing it with a moving average of longer duration (e.g., 50- or 100-period SMA) and taking trades in the direction of the trend as dictated by that indicator will improve its reliability.

Additionally, instead of a mere positive value for the EWO, we can also better improve its reliability by ensuring that for long trades, its value is sufficiently positive by a specific magnitude. For short trades, we can institute a rule where the EWO is negative by a certain amount. This helps in consolidating markets where frequent moves above and below the indicator’s zero line can give multiple weak signals.

So we will look at how the Elliott Wave oscillator may have fared on various chart examples using the criteria below:

In other words, to trade long, we want the EWO to be in the process of being not only positive, but increasingly positive. The trend, as interpreted through the simple moving average, should also be positive.

To trade short, we want the EWO to be not only negative, but increasingly negative. We also want the simple moving average to be negative.

An exit would entail when any one of these given signs is broken. 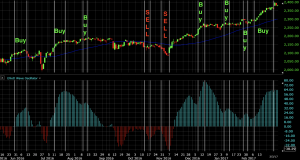 Over this roughly nine month timeframe, we have nine trades – 7 longs and 2 shorts, as marked between the vertical white lines. These were generated when all three of our criteria are met.

For longs, this means a positive EWO value of a certain magnitude, an increasing EWO value, and a positively sloped SMA.

For shorts, this means a negative EWO value of a certain magnitude, a decreasing EWO value, and a negatively sloped SMA.

Collectively, the seven longs generated a bit of profit, taking advantage of the ongoing uptrend. The two shorts roughly broke even.

Below we have a daily chart of the EUR/USD. 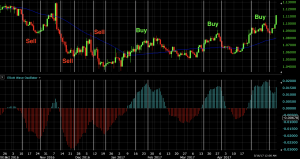 In this case we have six trades – 3 shorts and 3 longs, once again marked between the vertical white lines.

Our short criteria held throughout each short trade – negative EWO, EWO of -0.05 or lower (this value will vary by the asset and timeframe), decreasing EWO, and negatively sloping 50-period simple moving average.

Each of the first four were winners to some extent. The last two roughly broke even.

The Elliott Wave Oscillator uses the basic concept of a moving average crossover to generate trade signals. It is fundamentally a trend-following, momentum indicator.

Indicators that integrate previous data inherently lag price. While they may describe the recent past, they may not necessarily shed any insight into what will happen in the future.

It is more common for the EWO, and other moving average crossover indicators, to be used to confirm trade ideas generated from the price chart. It is not advisable to use them as signals themselves. If trade ideas are signaled by the EWO, they should be rigorously filtered with other tools.

We can also use the EWO on multiple charting timeframes, from the 1-minute time compression all the way up to the monthly (or higher if such a setting exists on your charting software).