The Galaxy S21 Ultra is the best smartphone I’ve ever used. Taking all of the good points from last year’s S20 Ultra and fixing many of the complaints, this device is an absolute powerhouse. To paraphrase Uncle Ben, with great hardware comes great flexibility, and as such, there are plenty of apps and resources you can use to make the most of your shiny new phone, and here are 10 of our favorites.

The S Pen has long been the gold standard to which active styluses are held, and using it with the S range is great. The last S Pen I used was the old Note 10.1 tablet, and Samsung has made a lot of improvements since 2012. Despite lacking Bluetooth, this is the nicest stylus I’ve used, including the Apple Pencil I have with my iPad.

Sadly, the stylus-supporting app ecosystem isn’t as vast on Android as it is on iOS. The best app I’ve used on Android so far is Infinite Painter. Sure, it doesn’t have as many features as something like SketchBook, but its simple interface and reliability more than make up for it. If you want a more streamlined and simple drawing experience, Samsung’s PENUP is a good choice. It only has a small selection of tools and templates, but it works well and has a nice coloring mode with plenty of images to choose from. PENUP is available through the Galaxy Store and APK Mirror.

Finishing off the S Pen selection, we have the Good Lock module Pentastic. This app allows you to change Air Command’s style, create your own pointer, and change the sound effects when using the stylus. The first thing I did was change Air Command to circle, which has incredibly satisfying animations. Pentastic is available through the Galaxy Store and APK Mirror. 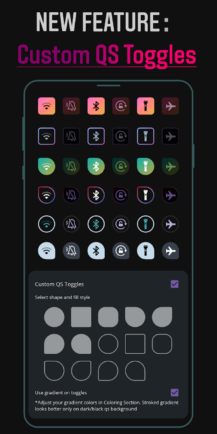 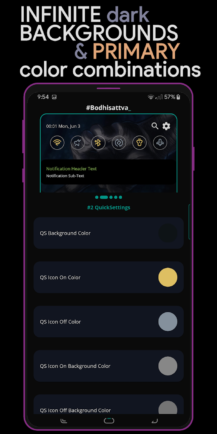 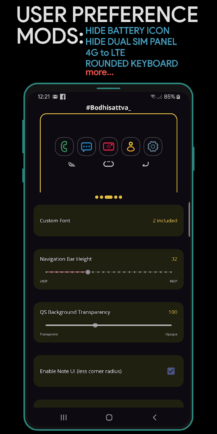 Hex Installer has been around for a while now and offers a plethora of customization options for your device. This app allows you to create your own theme for One UI, and it does so using Samsung’s built-in theme app, so no root is required. You can create separate themes for light and dark mode, theme third-party apps, and install different plugins. The plugins alter parts of the UI in specific ways. One mimics stock Android, for example. Another replicates MIUI and others offer user-made experiences. 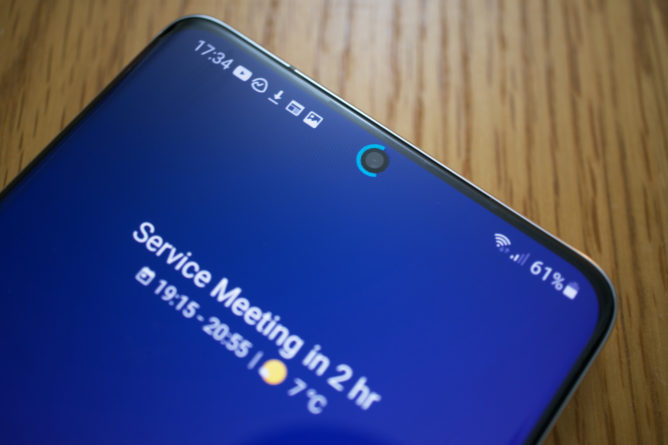 Energy Ring places a ring around the punch-hole selfie camera that indicates battery level in a fun and imaginative way. You can adjust the thickness, colors, and animations until everything is set up exactly how you like it. It’s been around for a few years now, and it’s still one of the first things I install when setting up a new phone.

One of my main complaints with Energy Ring was the insistence to release a separate version of the app for different devices, each with a paid version. Thankfully, this was recently rectified with the Universal Edition. Now one version of the app is all you need, with all of the same options and benefits from before. 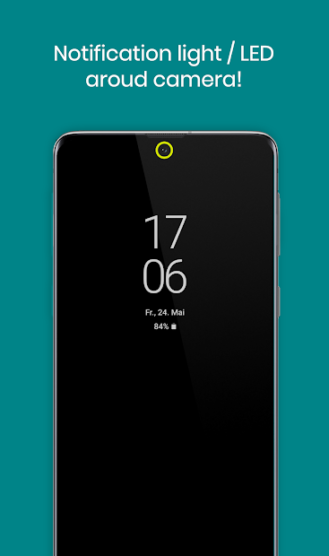 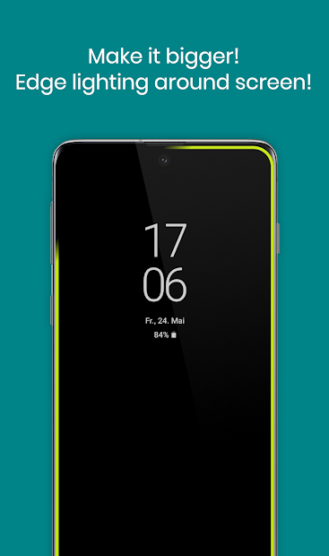 With the rise of always-on displays, LED notification lights have been on the decline. Thankfully, AOD Notify can replicate its functionality using the always-on display. It can flash the notification indicator around the camera cutout, like Energy Ring, fill the screen’s sides like Samsung’s Edge Lighting, or show a dot in the corner of the screen. It might not be as attention-grabbing as a bright LED, but it’s a neat trick that can scratch that nostalgic itch. 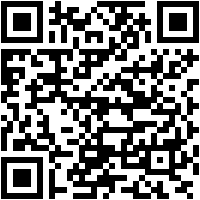 I know, I harp on about Good Lock a lot, but it truly is an exceptional collection of apps. Pentastic may have gotten its own mention earlier, but the rest of the experience should be experimented with too. Custom device themes, personalized navigation gestures, keyboard theming, and changing the icons displayed in the status bar are just some of the things possible with this service.

You can download Good Lock and its modules from the Galaxy Store, or you can find the relevant APKs from APK Mirror in this hub. 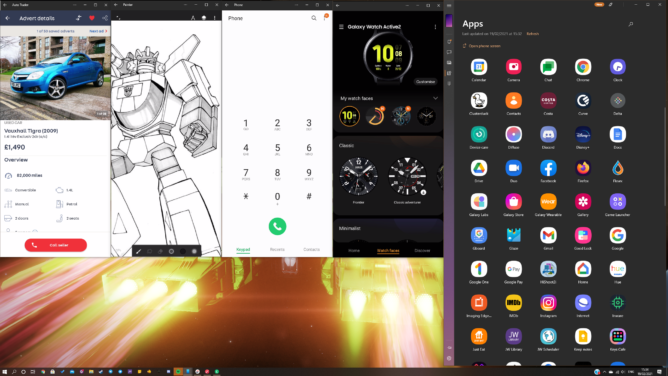 Microsoft Your Phone is a great tool for connecting your phone to a Windows PC. While this service is available for most Android devices, it’s built right into One UI with exclusive features. What’s more impressive is that these exclusives aren’t even available on Microsoft’s own Surface Duo. As well as notification mirroring, phone call support, and SMS access, this app can mirror apps onto your PC monitor. That means if you want to track an Amazon package on your phone quickly, you can do so without digging it out of your pocket. Exclusive to Samsung is the ability to have up to four of these apps open at once instead of the usual one.

As useful as all of these features are, I think the most useful aspect of Your Phone is copy and pasting screenshots. When reviewing apps or covering a change in Android, taking screenshots and moving them into an article is a frequent part of my workflow. Instead of syncing with Google Photos and clogging up my cloud, I can drag it right into our site. Editing photos taken on my phone using Photoshop is also made easier using this process. Your Phone is built into your phone, so there’s no need to install anything. Just look for Link To Windows in your quick settings page. 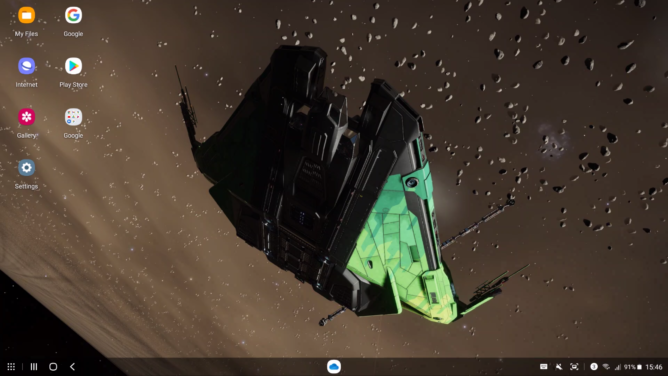 DeX has been around since the Galaxy S8, but it’s come a long way since then. Back in 2017, you had to place the phone into a separate dock for it to work, but these days it’s wireless. One UI 2.5 allowed DeX to connect to any Miracast device over Wi-Fi. The S21 takes things a step further by bringing this to Windows. Install the DeX client on your PC, and start the pairing process on your device. Within seconds you’ll be using DeX with your keyboard and mouse. DeX is pre-installed on your S21, so all you need to do is find it in your quick settings to get started.

I use a lot of Samsung’s first-party apps instead of Google’s. That’s not the case with the keyboard, though. Samsung’s keyboard isn’t bad by any means, but Gboard is so far ahead of everything else it isn’t even funny. Gboard is fast, reliable, and fun. The Emoji Kitchen is one of my favorite features, offering quirky and sometimes hilarious emoji mashups. On a more functional level, Gboard is still in a league of its own. The predictive text, auto-correction, and accuracy for swipe typing far exceed anything else.

If you’re using the S Pen, I highly recommend enabling handwriting input in the language menu. It’s more accurate at deciphering my handwriting than Samsung’s effort, and it’s fully compatible with all of the S Pen’s features.

Although I focus on the S21 Ultra here, many of these apps and features are available on other Samsung devices as well. One UI makes it incredibly easy to tailor the experience to your needs, and these are just some of the best ways to make the most of it.