The fire chief of Point Roberts, WA, is proposing an exemption of sorts to the US-Canada border closure to allow Canadians to travel to his community for COVID-19 vaccinations.

“We need to be helping each other out during this pandemic,” Chief Christopher Carleton told Daily Hive.

As such, Carleton said he has proposed three options:

The first option would be to give dual citizens who live in the Lower Mainland the ability to come to Point Roberts, get vaccinated, and not have to quarantine when they return home, “as they would never leave their vehicle” and would only interact with someone who’s been fully vaccinated.

The second option would be to allow Canadians who own property in Point Roberts to come across and get vaccinated.

“It would be like a vaccine vacation for them,” he quipped. “They could come down, get their vaccination, bring some influx to the local economy, and then head back home fully vaccinated for their communities.”

The third option would be to open up vaccinations to any other Canadians, “giving them the ability to be vaccinated here as well and return to Canada without having to quarantine for the 14 days,” he said.

Carleton said his ideas stem from obstacles people face in getting vaccinated that don’t entirely make sense to him, especially if fully vaccinated populations are the end goal.

“The current [border] restrictions in place at this point mean none of these options are allowed,” he said, adding that the restrictions don’t actually help more people get vaccinated, but rather have the opposite effect.

Land access to Point Roberts, located just south of Vancouver on the Tsawwassen Peninsula, from the nearest US location, is only possible via a 40 km trip through BC. 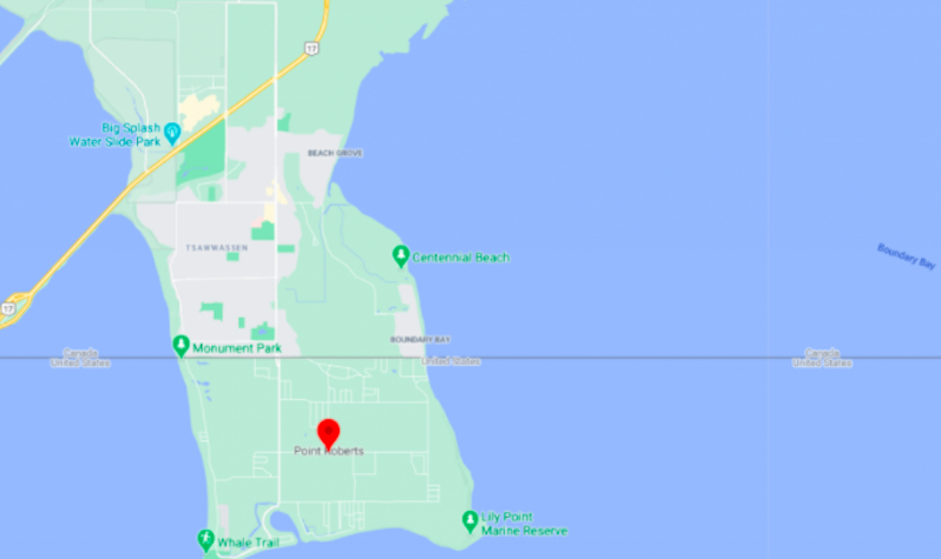 “It shouldn’t matter where or how a person gets vaccinated,” said Carleton. “If they have the opportunity to get vaccinated in the US to help protect Canada, that should be allowed and be received with open arms. To say you want to get people vaccinated while at the same time having policies in place that restrict their abilities to do so is just nonsensical to me.”

Asked if his ideas were the result of community consultation or just based on his own observations and perceptions, Carleton responded it was the latter.

“The majority of my population is already vaccinated,” he said. “This might be a good opportunity to reach out and offer these to dual citizens at least, who are unable to get vaccinated yet in Canada. To me, it’s just common sense.”

So far, Carleton said he has not received any response to his proposal from officials on either side of the border, which he’s frustrated by.

“Politics need to be set aside for this,” he said. “We’re in a worldwide pandemic, we’re all in this together, and if we can help each other, that’s something that should be supported.”

For his part, BC Premier John Horgan said this week he was planning to meet with Governor Jay Inslee to discuss “a range of border-type issues.”