Willie Mitchell won two Stanley Cups during his 907-game NHL career, but he has one regret.

He never won the Cup in Vancouver.

The Canucks had good teams during his final two years in Vancouver, losing in the playoffs both times, in 2009 and 2010 to the Chicago Blackhawks.

“The only thing I regret is we didn’t win,” Mitchell told Daily Hive in a telephone interview from his home in Tofino. “That’s my only regret in my professional career.”

A warrior on the Canucks blue line for four seasons, Mitchell left the team as a free agent in 2010, though not exactly by choice.

“I didn’t really leave, they just chose not to have me back. So it was kind of out of my control. They didn’t want me back because they couldn’t take the risk on my health… I understand that. In retrospect, [former Canucks GM Mike Gillis] didn’t have a crystal ball.”

While Mitchell’s concussion issues did plague him after he left Vancouver, he remained remarkably healthy in 2011-12 and 2013-14, playing a major role with the LA Kings during their two Stanley Cup championships. He also played the majority of the 2010-11 season.

“The ultimate for me would have been doing it in Vancouver just because [being] from here, growing up watching this team, I don’t think you could ever have anything that would replicate that and what it means to the province and the people of British Columbia.”

What could have been

There is no shortage of “what if” moments concerning the 2011 Canucks, and with 20/20 hindsight, the 6-foot-3 blueliner would have been the perfect type of player to combat the Boston Bruins.

“Certainly, more than anything, I would have loved to do that in Vancouver, but it was a big risk for them.”

Mitchell was coming off a four-year deal that paid him $3.5 million per season in 2010. After a concussion caused him to miss the second half of the 2009-10 season, he says the Canucks offered him a one-year deal worth about $1.2 million — well below market value, as Gillis was putting the final touches on a Cup-contending team close to the salary cap.

Other teams offered Mitchell two-year contracts worth $4 million per season, he says, but he opted to go to LA for $3.5 million because it was the right fit.

“To be honest, even if Vancouver did two years, close to what I was [making] before, I would have signed it in a heartbeat, just because that’s where my heart was.”

The Kings squeaked into the playoffs during Mitchell’s first season in LA, and lost in the first round. All season, the Port McNeill, BC native watched as his former team — the team he dreamed about playing on as a kid — went on a dream run, up until Game 7 of the Stanley Cup Final.

“I think my first half of the year in LA it wasn’t very great because, I was there, but I still had half my heart somewhere else,” he said.

Mitchell says it was bittersweet watching his former team in the Stanley Cup Final.

“I vividly remember 2011… Absolutely wanted everyone on that team to win, but then also inside… I didn’t want them to win because of this [feeling of] ‘here’s my missed opportunity, oh my god.’ As you get later in a professional life as an athlete, you wonder if you ever have the opportunity again and certainly it didn’t work out and I would have loved to see that happen to all my friends on that team, for the Aquilinis, for the broader province.”

Winning the Cup in LA

How epic were the Stanley Cup parties?

“No one prepares you for after you win the Stanley Cup. And oh my god, is it a party. And it’s not just a party for a day, it’s a party for a year, effectively.” 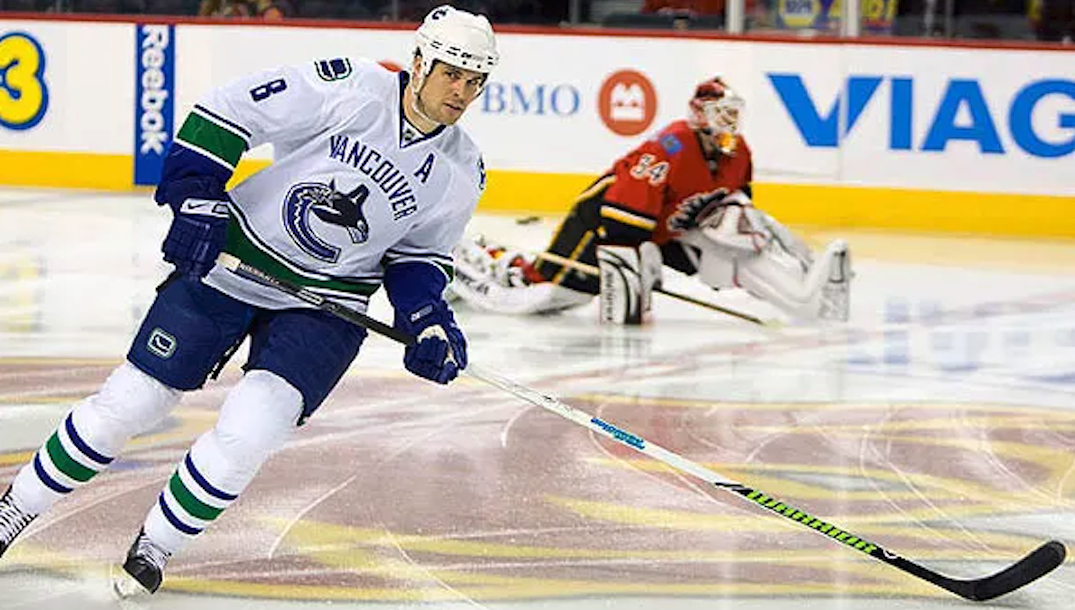 The funniest on-ice moment during Mitchell’s time in Vancouver was without a doubt the time he took warmup with a giant stick in his hands.

It happened when the Canucks were in Calgary on February 17, 2009, set to face the Flames, a team they were chasing for first place in the division.

“I just wanted to be cheeky back to Mike Keenan,” Mitchell explained. Keenan, who was the Flames’ head coach at the time, suggested that Mitchell was using an illegal stick when he spoke to the media earlier in the day.

“I think Mike Keenan was trying to get in my head a little bit, and our team’s head.”

So Mitchell, who contends his stick was half an inch shorter than what was allowed, fired back. Canucks trainer Jamie Hendricks suggested fusing two sticks together, and his teammates told him to keep a straight face.

“I smiled playing hockey, I loved every second of it. I enjoyed every moment. So the boys were like ‘okay, just stone cold this in warmup. Just go ice.’ And so that’s what I did.”

Skating around on the Canucks’ side of the ice, Mitchell said his stick could nearly touch the Flames’ blue line from his side of centre.

“Dion Phaneuf’s looking at me like ‘what the hell is this?’”

Asked about the best off-ice story he could tell, Mitchell told a doozy.

Former assistant coach Rick Bowness was an “old school guy,” and decided to hold a meeting with the defencemen at a bar the night before a game in Nashville.

Naturally, when the meeting was over, Bowness left but the players stayed.

Did I mention Shane O’Brien was on the team at the time?

“Bones left… some guys on the road having some fun and music in the background, we decided to ‘extend the shift.’”

O’Brien got up on stage and began singing the Garth Brooks classic, “Friends in low places.”

“The place is packed, he’s getting low kind of dancing as he’s doing it. He’s walking away from the stage and everyone’s cheering him and he’s handing high fives, loving being in the moment.”

Just one problem: Canucks owner Francesco Aquilini, who was on the road with the team, walked in.

“[O’Brien’s] walking by and he’s like high-fiving Francesco Aquilini and giving him the fist bump and keeps on going. He does not know it’s our owner. Had no clue in the world that it’s our owner.”

“He had no effing clue at the time.”

Needless to say, O’Brien was worried about getting traded after that.

“OB was always such a character and got himself into predicaments like that.”

Concussions forced Mitchell to retire in 2016, and he hasn’t been involved in the game since, apart from being one of the players that Molson Canadian has brought on as a spokesperson for their new Stanley Cup Batch campaign.

“It’s kind of a cool campaign, Stanley Cup Batch, kissed by the Cup,” he said.

Introducing Molson Canadian: Stanley Cup Batch. Because every fan dreams of sipping from the #StanleyCup.

Mitchell had an opportunity to get into broadcasting with NBC after he retired, but turned it down.

The 44-year-old is now the president and owner of Tofino Resort and says he loves it.

While he said he’s open to possibly getting into management with an NHL team one day, Mitchell is content living a good life on Vancouver Island with his wife and two young children.

“Nature is my health and wellness, so I just bounce around trying to do fun stuff in the outdoors.”