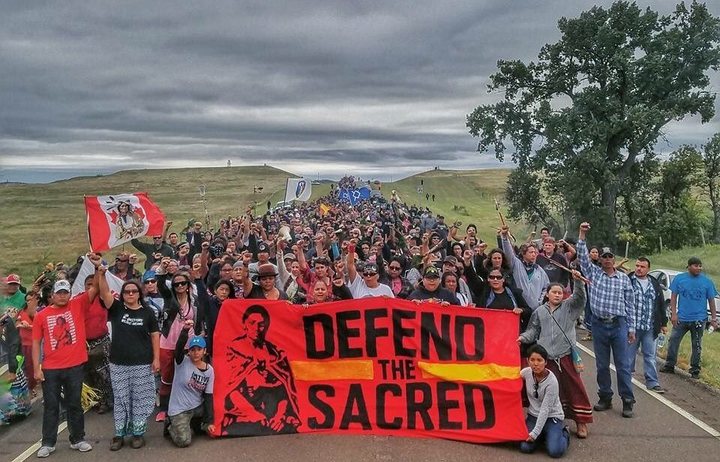 Over 8,000 people representing more than 180 tribes gathered at the Oceti Sakowin Camp at Standing Rock, North Dakota, to protect their sacred sites. ‘Gathering Our Hearts at Standing Rock,’ a documentary film by Fidel Moreno, chronicles the events of the protests and will be screened Sunday, Nov. 12, at Congregation Ahavath Sholom in Great Barrington. Photo courtesy Indigenous Environmental Network

Great Barrington — Congregation Ahavath Sholom will host filmmaker Fidel Moreno for a screening of his film “Gathering Our Hearts at Standing Rock” Sunday, Nov. 12, at 2 p.m. The program will open with a traditional water ceremony followed by the 63-minute documentary film, a question-and-answer session and refreshments.

Moreno is an award-winning filmmaker whose works include “The Peyote Road,” ‘LifeSpirit,” and “Wiping the Tears of Seven Generations.” He is also a youth advocate and community development specialist, having worked with Native American tribal youth and restorative justice programs for many years. Moreno identifies as Huichol, Chichimeca and Mexican-American and is also a ceremonialist working with veterans, youth and communities experiencing posttraumatic stress disorder.

The event is free and open to the public. For more information, contact Congregation Ahavath Sholom at (413) 528-4197 or info@ahavathsholom.com.

BHS, Berkshire Voters for Animals to screen ‘Dog By Dog’

Pittsfield — Berkshire Humane Society and Berkshire Voters for Animals will present the documentary “Dog By Dog” Thursday, Nov. 9, at 7 p.m. at the Berkshire Museum.

“Dog by Dog” sheds light on the realities of puppy mills by following the money trail across the U.S. and confronting those that have maintained the system. In addition to reinforcing the “adopt, don’t shop” message, the event aims to educate people about current Massachusetts legislation S.1155 and H.1080: An Act relative to protecting puppies and kittens; and S.470, An Act banning the sale of cats and dogs in commercial pet shops.

Tickets are $7.50 for the general public and $5 for Berkshire Museum members. A portion of ticket sales will benefit BHS. For more information, contact BHS at (413) 447-7878 or Berkshire Voters for Animals at berkshirevotersforanimals@gmail.com.

North Adams — WordXWord will present “Politics of Identity: Poetry of Inclusion and Exclusion” Sunday, Nov. 12, at 3 p.m. at the Massachusetts College of Liberal Arts’ Gallery 51. The performance, a program of work by poets spanning ages and styles, will take place within Gallery 51’s exhibition of Setsuko Winchester’s Freedom From Fear/Yellow Bowl Project.

For “Politics of Identity: Poetry of Inclusion and Exclusion,” WordXWord has challenged poets to examine the politics of identity from a personal, social or cultural perspective. Poets are free to address this challenge as they see fit and from whatever direction they choose.

The event is free and open to the public. The audience is advised to expect the unexpected and parents are cautioned that the program may contain explicit material. For more information contact info@wordxwordfestival.com.

Norfolk, Conn. — The Norfolk Curling Club will hold its Wine on Ice tasting and silent auction Saturday, Nov. 11, from 4 to 7:00 p.m.

Wine on Ice IV will include tastings of red, white and rosé wines provided by Ledgebrook Spirit Shop and Stateline Wine & Spirits. There will be craft beers from Two Roads Brewing Company and Big Elm Brewing and handcrafted spirits from Berkshire Mountain Distillers and Full Moonshine. Hors d’oeuvres will be provided by Wood Creek Bar & Grill, Infinity Music Hall & Bistro, Berkshire Country Store, Station Place Cafe and Husky Meadows Farm. The event will also include live curling demonstrations by members of the club and a silent auction featuring a variety of unique items.

Tickets are $30 in advance and $35 at the door. Wine on Ice IV is a public fundraiser for the club, which rebuilt its facility following an arson fire in 2011 and which still has outstanding loans. A portion of all proceeds will also support programs that promote the Olympic sport of curling. For tickets and more information, contact Caryn Trager at (860) 922-2057 or winetasting@norfolkcurlingclub.org.