Zulutrade is an automated trading broker. It works quite simply: traders are exhibited as mirror signal providers, but Zulutrade can only be used with certain brokers. The brokers pay Zulutrade per trade executed through them. Signal providers get paid at the amount of half a pip per lot traded from the provider’s signals, when they are profitable.

So, what happens is the “user” signs up with Zulutrade, and looks for signal providing traders to mirror. Zulutrade maintain statistics that are honest and transparent on all of these traders, showing who is making money, allowing users to view the trading records of those traders before choosing. Overall, it is set out to enable a very transparent and logical process.

How are the Trade Copiers Doing?

Not all the trade copiers allow their results to be publicly viewed. However, examinations of a sizeable random sample of those that do show that over a typical Quarter, 90% are not making money but in fact are losing money. This seems surprising, as even with access to a large number of traders that have been performing statistically well, allowing for diversification and vetting, it would seem that the trade copiers are doing no better statistically then new traders that just open accounts and begin pushing buttons before they fully understand what is going on?

Can this be explained? It certainly can, and even if you are not interested in mirror trading in general, or Zulutrade or another automated trading broker such as eToro in particular, please read on as you might learn something that comes in useful for your personal trading methodology and expectations. It has nothing to do with which Forex broker is used with Zulutrade.

An old trading proverb says “You can take many small losses, or you can take one catastrophically huge loss.” What this saying is trying to get at, is that the most reliable ways to make money by trading the market do not necessarily deliver regular profits. Even the best trading methods do not work with a high level of individual predictability on individual trades, and can suffer from a strong of losses. In fact, the most profitable methods overall usually produce something like twice as many losing trades as winning trades, with the winners being so large that they more than make up for the losers.

This is extremely hard for many retail traders to accept. They believe that a skilled trader is right most or even nearly all of the time, and when a trade does not make money they think that something necessarily went “wrong” in the analysis and/or execution.

This belief is compounded by algorithmic ranking of traders in league tables using formulas that punish losing streaks, such as the formula used by Zulutrade. This is logical mathematically, but it has the effect of promoting traders that have either been riding a lucky streak, or who have been trading in a non-robust way, i.e. by worrying more about consistency than overall results. The overall result, in the final analysis, is what makes money. 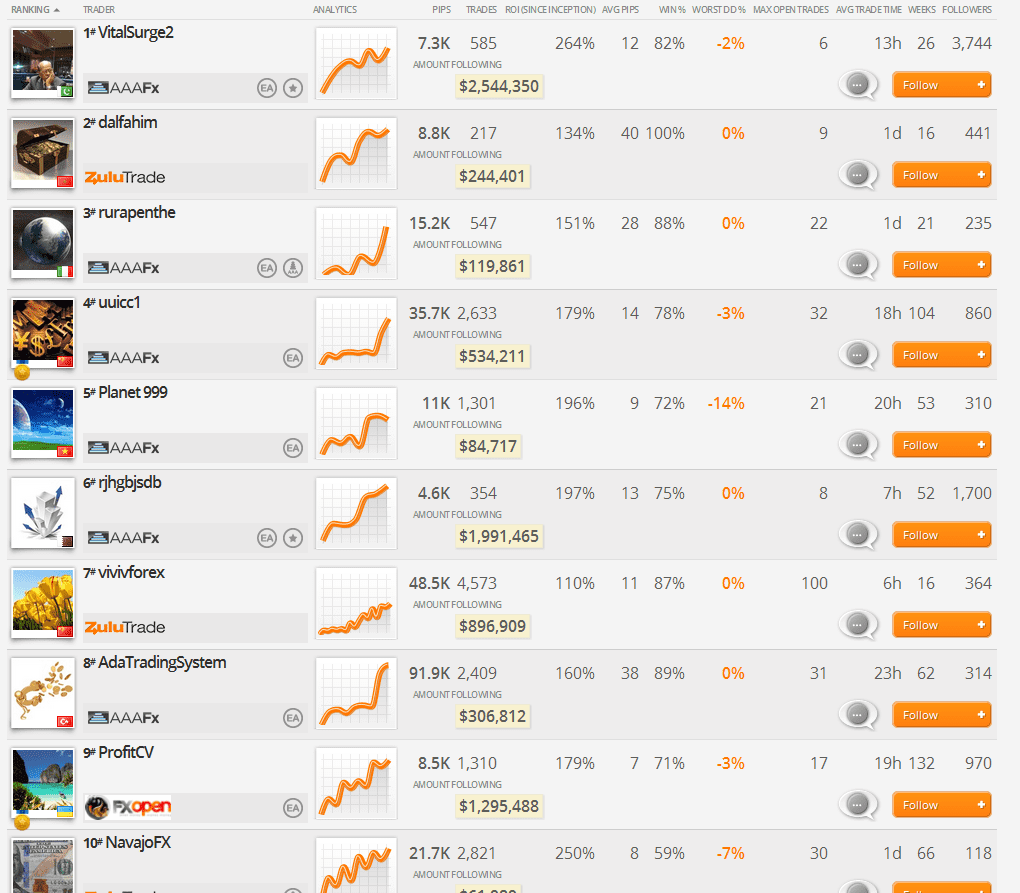 In his book “Fooled by Randomness”, Nassim Taleb posits the case of a universe of 10,000 hedge fund managers, and shows how over a typical 10 year period in the market, just assuming pure randomness, there would be about 10 fund managers that would have recorded a positive return each year. Profiles would be written of these star managers, praising their incredible discretion and judgement, implicitly assuming conservatism and market savvy achieved this incredible result.

By way of example, the image below shows how excel only needed about 2200 iterations to randomly produce a sequence of 11 consecutive positive numbers from a range from -0.5 to 0.5. 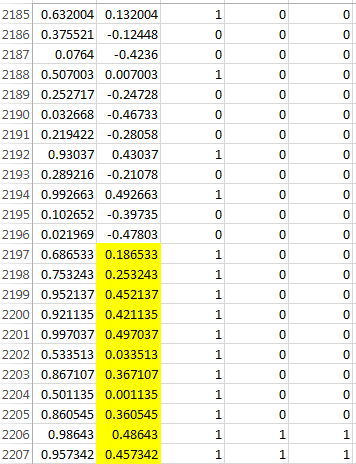 There is no doubt that at least some of the star traders shown in the Zulutrade signal provider rankings simply got very lucky. Needless to say, anyone who has been very lucky for a long time, has a luck that is likely to change!

So the top-ranked traders in Zulutrade or in any other similar algorithmic ranking are going to consist mostly of traders that either are making money by luck, or who are pursuing strategies that are not robust and so will crash and burn eventually. Of course, there will be some genuine diamonds in the mix, but how will the trade copiers pick them out? It is even possible to make a good and meaningful selection of traders to copy with the data provided by Zulutrade? I don’t think so, because the statistics just show you the performance, but don’t really tell you anything about how the performance was achieved. You would have to look at a few hundred individual trades and see what was going on when each trade was made to really understand what that trader was doing. Their Sharpe ratio and maximum drawdown is actually probably not going to tell you what you really need to know to decide whether to invest in them.

Zulutrade’s ranking formula is proprietary and secret, but is stated on their website to be based upon maturity, exposure, and draw-down. On every one of these criteria, with the possible exception of exposure, most trade providers that best satisfy these criteria are probably heading for a fall, because the promoted traders are the ones that have been skating on thin ice longer than anyone else.

I really don’t mean to insult Zulutrade or imply anything about them, as they are offering an honest and transparent service, plus a ranking system that will identify the diamonds that make money, but unfortunately a much larger amount of trash as well. Ironically, things are made even worse by the operations of the trade copiers themselves.

How Trade Copiers Mess It Up

In the context of the ranking system, most trade copiers will approach it in a way they consider to be intelligent: select high-performing traders, quickly fire any poor performers, and increase trade sizes on the winners just before they stop making money and start losing.

The effect this will have is to make results even worse, as the copiers will be chasing yesterday instead of tomorrow, and will not be sitting through the losing streaks that the true long-term winners will usually generate. Market conditions change frequently and rapidly. In fact a typical day for any instrument will see it move in the opposite direction to yesterday, as the market ranges most of the time. The end result will be adding to losses and cutting winners short, effectively.

Many hedge fund managers will tell you about how they attract an influx of investment into their funds just after a period of very strong performance, and how they know that these “chasing” investors are often disappointed when, quite naturally, a period of worse or even negative performance follows.

Trade copiers are not traders, they are investors managing a fund of funds, and they usually do not have the research tools made available to them to have a real chance of picking out the diamonds, which is a hard enough task even for market professionals.